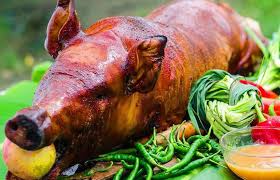 The food culture of the Philippines is sometimes overshadowed by it’s northwestern neighbors – Thailand and Vietnam. But the Philippines can easily hold its own on the global culinary stage and even came in second in a 2015 CNN poll asking readers what country was their favorite food destination.

From the ubiquitous adobo to the cringe-worthy balut, Filipino cuisine is varied and delicious (though not always particularly healthy). In fact, Anthony Bourdain claimed the best pork he ever ate was in the Philippines.

We spent 2 months travelling around the islands and trying all of the amazing Filipino food we could find. We have compiled 15 of the best dishes in the Philippines for your sampling pleasure – make sure you try them all!

15 Must-Try Foods in the Philippines 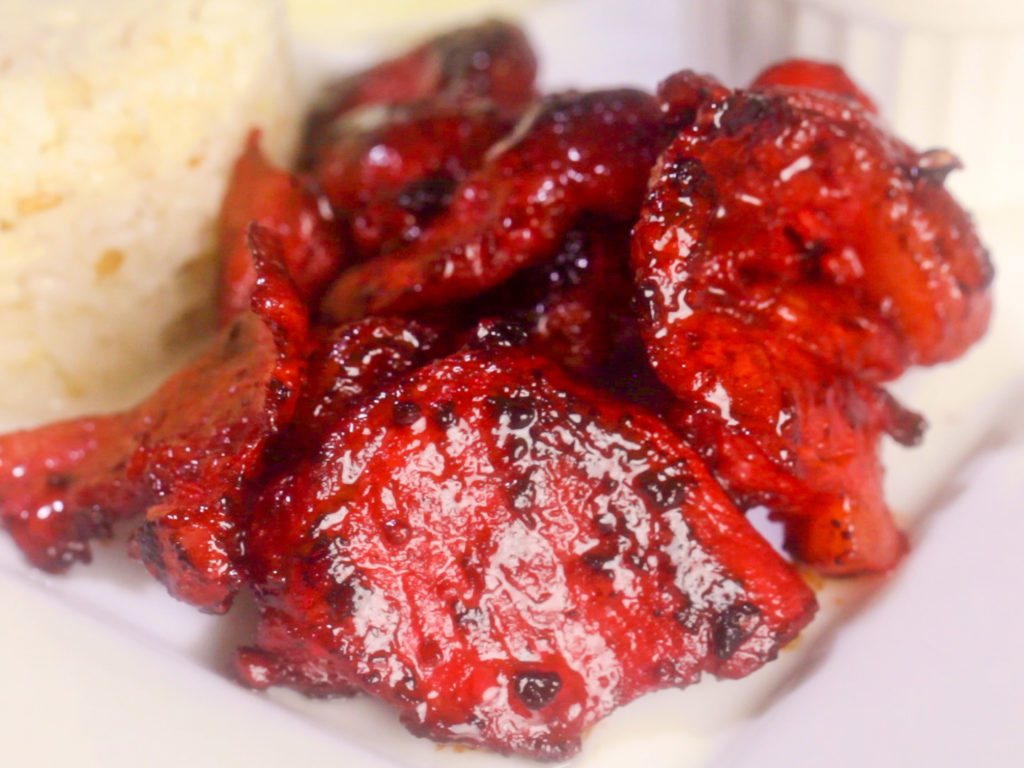 Tocino is the Filipino version of bacon. It is pork belly cured in sugar, salt, and various other spices then fried – yum! It is served as part of a common Filipino breakfast called tosilog. The name is a combination of its 3 parts: tocino, sinangag (garlic fried rice), and pritong itlog (fried egg).
There are lots of different versions of the silog breakfast trio that simply replace the Tocino with another meat options. Tapsilog features marinated beef (‘tapa’), bansilog has fried fish (‘bangus’), and maybe the least adventurous choice is hotsilog which simply includes a hot dog.

Our favorite by a landslide was tosilog because who doesn’t love bacon?

Kinilaw is a delicious seafood dish served up all over the Philippines. It consists of slices of raw fish marinated in vinegar along with other ingredients like calamansi juice, salt, pepper, and chili peppers. The name kinilaw literally means “eaten raw”. Very similar to ceviche, the main difference is that Kinilaw relies on vinegar rather than lime juice to “cook” the fish. This is a perfect food for family dayouts with kids playing squishies.

Filipino food can be pretty heavy so if you’re feeling like you need a healthy alternative, kinilaw makes a great appetizer or light lunch.

Sinigang is a sour soup that is typically made with pork and tamarind though sometimes other sour fruits like guava, green mango, or calamansi are used instead. Tomatoes, garlic, onion, and various other vegetables complete the stew.

It’s a delicious Filipino comfort food and makes for a hearty hangover breakfast if you had a few to many Pilsens the night before. 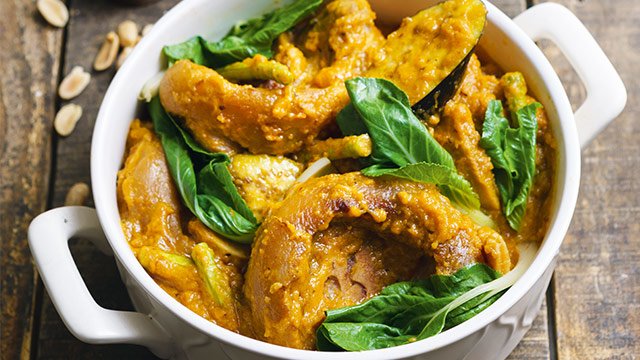 Kare-kare is a thick stew made from oxtail, vegetables, and a peanut sauce. It reminded us a bit of massaman curry from Thailand which makes sense as the word ‘kare’ is derived from the Filipino word for curry. Supposedly the best kare-kare comes from Pampanga which is just north of Manila, but you’ll find this dish served all over the country.

Try ordering kare-kare along with lechon kawali (deep fried pork belly) and then use the thick kare-kare sauce for dipping the lechon. And best to plan on taking a nap afterwards… 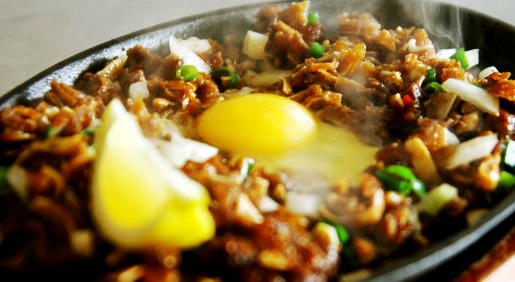 You’ll know someone has ordered sisig when you hear the sizzling and see the steam rising off of the cast-iron skillet. It’s like Filipino fajitas!

Pork sisig is most common and it consists of chopped up pig ears, jowls and liver, onion, and chili peppers delivered on a sizzling hot skillet with a raw egg on top. You’ll need to mix in the egg to cook it before the skillet cools down. It usually comes with a couple calamansi halves so you can squeeze the juice over the top.
Other versions of sisig include pork belly, chicken, tuna, eggplant, and pretty much anything else you can put on a sizzling hot plate.

Adobo is often called the national dish of the Philippines and it’s certainly the most famous Filipino dish. The flavor is created using vinegar, soy sauce, garlic, bay leaves, and black pepper. Also chili peppers are sometimes added to give it a little spice.

The most typical adobo dishes are chicken and pork but you’ll find every restaurant in the Philippines has their own take. The meat can either be cooked into a stew or marinated in the adobo sauce and then pan fried.

If there is one dish you should try before you leave the Philippines it’s pork adobo!

Humba is very similar to adobo, but also includes banana blossoms and tausi (fermented black bean paste). This gives humba a sweeter taste than adobo and results in an amazing spicy/salty/sweet flavor. Whereas you can find the adobo flavor applied to all types of meat and vegetable dishes, humba is almost always made with pork.

You’ll encounter humba in the southern islands of the Philippines and it’s even sometimes referred to as Cebu’s version of adobo. Make sure you try them both and see which you prefer!

Lechon is a broad term that refers to a suckling pig that has been seasoned, skewered on a bamboo pole, and roasted whole over charcoal. It is particularly famous on the island of Cebu and you’ll see lots of shops along the roads with whole roast pigs in the window. On his trip to the Philippines Anthony Boudain asserted that the lechon on Cebu Island was “the best pig ever!”

Just as there are many ways to prepare pork (and many different cuts of meat) there are plenty of ways to prepare and serve lechon after it has finished roasting. It can be eaten right off of the carcass with a side of sinangag (garlic fried rice) or the leftovers can be added to dishes like sinigang or paksiw na lechon.